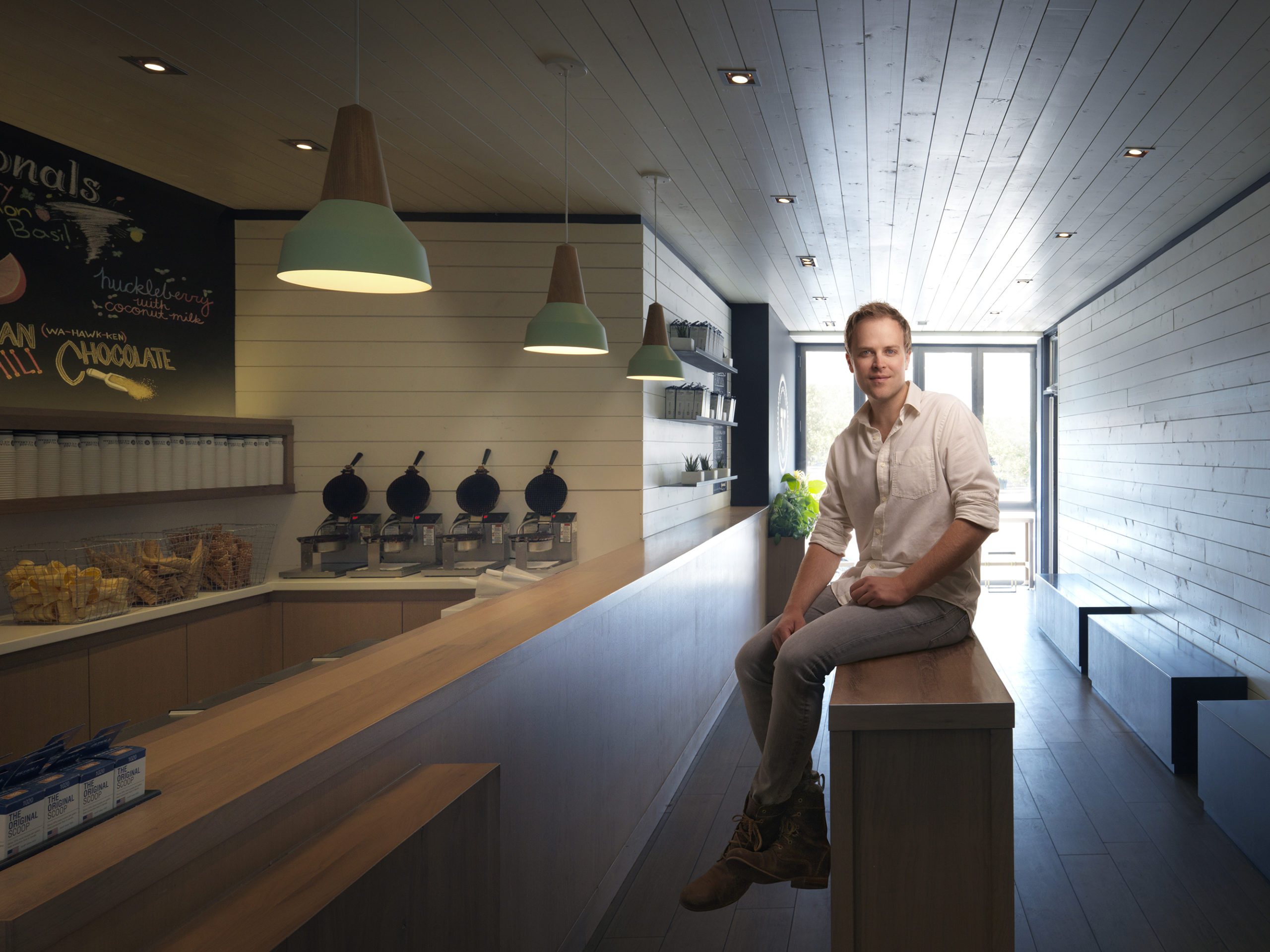 Hot off a South American motorcycle odyssey, our founder Billy Friley found himself on his Grandma Gladys’ porch. This is where he discovered a life changing pint of rich, locally made huckleberry ice cream.

Billy was born and raised in Calgary, Alberta and fondly remembers his childhood home filled with family, friends, and the extraordinary meals prepared by his parents almost every day. While competitive soccer and early-morning swim meets were in short supply, freshly baked bread, southern BBQ, the spoils of his father “big” Bill’s hunting and fishing adventures, and his mom’s roasted vegetable wizardry were staples at the dinner table. This sparked Billy’s discerning palate and love of food.

Before discovering his passion for ice cream, he first pursued a degree in Aerospace Engineering to fulfill his childhood dream of becoming an astronaut. After a few years in the program, shooting for the stars was not at all what he imagined it would be, so he embarked on a different trajectory. After switching programs four times, he settled on an Arts degree in Montreal before returning home to Calgary.

In 2010, at the age of twenty-five, Billy set off on a solo motorcycle adventure from Calgary to Rio de Janeiro, Brazil. For four months, Billy made his way south, passing by the Grand Canyon, to Baha, Mexico City, and beyond. The sights, sounds, food and culture of Mexico, from the colourful and vibrant neighbourhoods to the pulse of people congregating at roadside taquerias and busy urban parks, had a profound impact on Billy. He felt inspired, not to continue his journey to Brazil, but instead to pursue a deeper calling to curate that same energy in the neighbourhoods of his hometown.

He made a U-turn and hightailed it back to Calgary with a mission to create, in his own unique way, an epic neighbourhood gathering place.

But why ice cream?

Shortly after his South American odyssey, Billy visited his Grandma Gladys in Helena, Montana. One evening, he grabbed a plain white container of locally made ice cream with the word “Huckleberry” written on the lid. With a spoon in hand, he dove into a life changing pint of decedent ice cream, rendered deep purple from the local huckleberries that flavoured it. Equally as impressive was that the ice cream was made at a small-batch ice cream shop just down the road.

Billy never looked back. He woke up the next morning determined to make the best ice cream Calgary had ever tasted. As he drafted a business plan, he resolved to build an ice cream business that would serve three distinct purposes.

Firstly, each scoop shop would produce a small selection of super-premium ice creams on-site, with creative twists on nostalgic “Americana” flavours. Secondly, each scoop shop would serve as a vibrant neighbourhood hub. Gone were the evenings of quiet, empty shopping plazas. Wherever there was a Village Ice Cream, the surrounding neighbourhood would be alive with people walking, biking or rollerblading for ice cream and a good dose human connection. Lastly, Village would do its part to make Calgary a more inclusive, tolerant and diverse city to live in by partnering with and donating to the amazing organizations that help to make Calgary a safe and welcoming place to call home.

The very first Village Ice Cream opened up shop in 2012 in a plain old building on an almost impossible to find cul-de-sac in Victoria Park. A decade later, with locations in Britannia Plaza, Garrison Woods, Bridgeland, and University District, Village Ice Cream remains in hot pursuit of cold perfection.

Billy and his wife Tetiana continue to play a significant role in the daily operations of Village Ice Cream, when they aren’t chasing after their two young boys. Billy’s favorite flavour, you ask? Guide’s Mint!